I was lucky enough to be selected as a Jerwood/Arvon mentee in 2017. I wrote this blog post for the Arvon Foundation, to record the experience and to express my gratitude.

When you arrive at Totleigh Barton, it feels like you’ve stepped into 1537. The thatched farmhouse is flanked by goose huts and piggeries. Stairs lead from the dining room to a bedroom with lancet windows and woodwormy beams. A sundial counts the hours by the bathroom window. There’s no such thing as wifi.

At the bottom of the hill is the River Torridge, where Ted Hughes cast for salmon. This is the place where John Moat and John Fairfax founded the first Arvon Foundation centre, so it seems fitting that our journey as Jerwood/Arvon mentees started here.

We spent the first evening getting to know each other better over jokes, wine and apple juice from Totleigh’s trees. I was thrilled to hear that the poets were going to have their mentoring sessions in The Pod: a writer-sized nest box for hatching ideas. 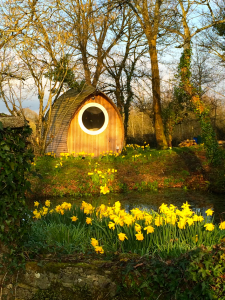 While I was looking forward to the poetry sessions, the thought of writing a play made me want to hide under the table. However, the exercises during Tim’s playwriting workshop – drawing a portrait of a friend without looking at the paper, writing a dialogue that had two simultaneous meanings – were a super way to train us to think figuratively: a crucial skill for all writers.

Around the long dining-table, fiction mentor Jacob showed us how ‘escalation’ worked in short stories by famous authors. To think about characters’ motivation, we created a plotline about a cross-dressing nun! He spoke about the ‘blue light’ that haloed writers who had found their voice, and of writing as divining until you ‘hit water’: your inspiration, your theme. A skilled mentor can put the forked twig in your hands and guide you to where the springs are hiding.

For her workshop with the entire group, Pascale set us the task of writing poems in response to Surrealist art. She handed me a postcard at random – Christian Schloe’s ‘The Wandering Forest’. The image shows a girl in white riding a roebuck; his antlers are a tangle of blossoms and fruit. In her hand, the girl cradles a bluebird. I couldn’t stop writing about it.

We spent our time outside the workshops either scribbling furiously in the library, with books strewn all over the table, or heading off along the riverbank for adventures. We poets even managed to find our way to Sheepwash. We squeezed into a bookshop in a telephone box, and drank tea at the Half Moon Inn, where Ted Hughes and fellow eco-warriors schemed to save Devon’s polluted rivers. 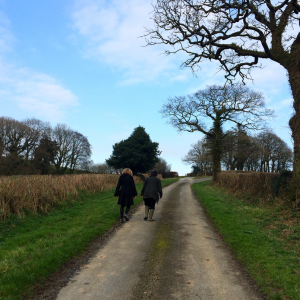 Just before the mentees’ reading, Joe announced that Jacob had just won the inaugural Jhalak Prize for his novel The Bone Readers. The Barn exploded with whoops and cheers. Everyone read something they had written that week, sharing the moments when they had ‘hit water’.

It was wonderful to have dedicated time to write, but was even more wonderful to have the support of Joe, Tim, Pascale, Jacob, and our new friends on the scheme. The Jerwood/Arvon scheme can also help you to stand out in the literary world. A month after we got back from Totleigh, Poetry News published an article about the mentees. The article features a picture of the twelve of us, standing in the garden among the daffodils. We’re all in touch through email, Facebook and Twitter, and I feel that Seraphima, Roma and Alice have become my sisters in poetry. I can’t wait to see everyone again for the retreat in February. 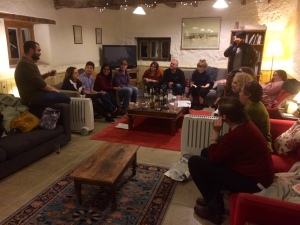